This year’s Open Studio also included Australian artist Lisa Myeong-Joo who came to Mumbai for a month at the end of 2018.

Lisa’s practice is performative, collaborative and repetitive. She is interested in the dual nature of things, often using both hands with word and drawing to come between these two parts. There is clarity and purpose in her practice when working in foreign places. In order to make sense of the seemingly nonsensical, there is a search for universals in the re-arrangement of symbol, language and gesture. In her conceptual practice, she works through performance, text and installation.

Lisa Myeong-Joo was adopted from Seoul in 1988, and grew up in Australia. Despite graduating from a Bachelor of Interior Design in 2012, Lisa went on to pursue an artistic practice, basing herself in South Korea, learning the culture and language and later an artist in residence at the Museum of Modern and Contemporary Art Korea, Changdong in 2016. For the past 2 years she has been traveling to India for residency and collaborative projects, most recently at Changer Haat, Kolkata.

For her project at WAA, Lisa created an installation made up of playing cards she has found during her travels in India. All the cards pertain to specific spots in the country and audiences were invited to touch and play with them, often eliciting their own personal stories related to the cards or the places they came from.

Lisa also grew fascinated by the many cables that stretch across Mumbai’s skyline and decided to create an piece inspired by this dense network of wire using her own hair which was falling due to the weather change. She created her own diorama’s using this hair and turned it onto a performance piece where she solved daily crosswords with her mother who was helping her over the phone. The performance became a way for her to bond with her mother who was far away and bring it the city of Mumbai, her current temporary home. 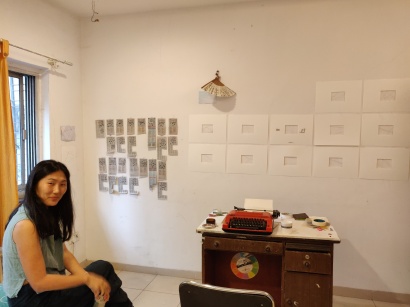 At the end of her residency, Lisa held a performance in collaboration with her artist friend Reiko Shimizo and Studio Ex-forma, a design studio, titled “Sun Sanga”.

WAA Residency was launched in 2013 with the aim to facilitate and support art practice. One of the few art residencies in Mumbai, India, the residency provides individual studio space, professional networking opportunities and an intellectually stimulating environment for dialogue on visual arts practices for artists and curators. In addition, the residency regularly organises artist talks and open studios. The residency is situated in the heart of Mumbai in Bandra, a vibrant neighbourhood, not far from the art district where galleries, museums and art spaces are located. 9 spacious studios situated in a quiet lane above the WAA office and project space.